Poem by Jessa, Art by Livy.

lovers have sat here before,

blueberry bubblegum stuck to the edge

of a metal placard of someone’s name

this sky has seen sun before,

on the verge of raining down

a memory or eight on my drink,

food i only eat in crowds

grass was greener before,

back in a hazy, hazy July,

where the heat helped me to melt

so maybe that’s why

i just felt lighter before,

when we walked, walked on

you looked at me with watchful eyes,

eyes i’ve seen on your sister,

pupils i still dote upon…

i pinch my knuckle.

i am not in the daze of before,

in the hard, hard now

even my stomach, still small; kicks.

a raindrop falls on my eyebrow

alone, far too much to fix 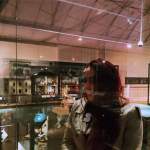 Jessa is an eighteen-year old Londoner and sleeping academic. When she isn’t stress-eating, she’s writing plays and making indirect spotify playlists. She has written for the National Theatre and her Twitter and instagram is @cynicaljessa.

Livy is a 16 year old student from California, who likes to dance when no one is home. She is interested in making the world a better place, but has not figured it out yet.