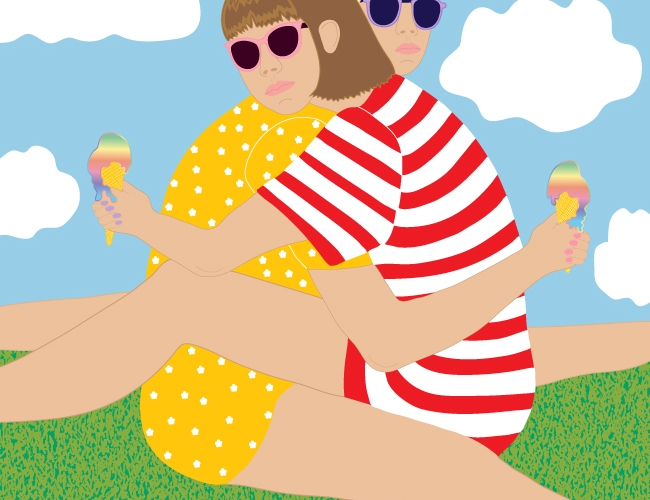 Jianna Justice and Emily Johnston are filmmakers from Atlanta, Georgia who created a short documentary, Teenage Girl World, as an ode to female adolescence in the wake of their final teenaged years. The film, which was directed, produced, and edited by the duo, provides viewers with various perspectives of the shiny, awful, magical, and often confusing tapestry that is the teenage girl experience. As the film’s perfect and sparkly theme song (written and recorded by Jianna under the name penny lame) succinctly sums up the experience, “It’s terrible and wonderful.”

I talked to the filmmakers about their project and their own experiences as teens, but first, take a look at their honest portrayal of teenage girlhood:

I found Teenage Girl World to be a wonderful summation of the teen girl experience. Can you explain some of your initial motivation and inspiration behind its creation?

JJ:  Basically, we were both really sick of wanting to make important things but never actually following through. We knew we wanted to make something, and make something together, that was honest and felt like us. We also wanted to create this project entirely on our own, with no help, to test our capabilities and prove that girls can get stuff done!

EJ: The original concept came from a short video that I did for school, but we really expanded on it and did a lot of the things I wish I could’ve done with the little project. It started out as trying to challenge the narrative around teen girls, but ended up being more of an exploration into that time period and the feelings and experiences that accompany that–which ended up being more raw, which we both liked.

As a fellow 19 year old, it feels very strange to be on the border of leaving my teen years and entering my 20’s. Do you feel a sense of loss for your teen girl years, or are you a little relieved for them to soon be over?

JJ: It’s kind of like saying goodbye to this warm safety blanket, which is terrifying but also really exciting because you realize how big the world is and how much it has to offer. When I think back on my thirteen year old self, versus the teen I am today, they are two totally different people, so I kinda can’t wait to see who I grow in to.  ~ I hate to see you go, but I love to watch you leave ~

EJ: I definitely feel very weird about it. I always thought that being a teen girl would be my peak sort of, so I don’t really know how to move forward. I feel like this was the time I was supposed to “find my true self” or something but I still question my outfit choices like when I was thirteen.

One of the girls who you interviewed described being a teen girl as the “worst and best.” I found that statement super accurate. How would each of you personally describe your own experiences in a few words?

JJ: So messy, but in the most magical kind of way. Trying to figure it all out. Figuring some of it out.

Who are your favorite teen girls or teen girl characters in pop culture?

EJ: Willow Smith I think is so very cool and inspiring. She is just always being so real and cool but also making cool art and not really caring about what other people think. And she’s so young!!

JJ: All of the girls in Twin Peaks…except Donna.

What were your most important tools for surviving teenage girlhood?

JJ: Each other and our girl gang. unbelievable amounts of ice cream (our favorites are M&M and Rocky Road Arctic Blasts from Zesto’s in Atlanta). Figuring out what I actually liked, not just what was “cool” to like, even if that meant trying out some questionable outfits and surviving a few bad haircuts. Learning not to shape my interests around others, finding shit that made me feel good!

EJ: Listening to music every possible second I could, scrolling through the internet, learning that being myself could take a lot of forms and to not discount how i’m feeling in the moment, spending time with people that make me feel like a princess (a requirement).

How do you think being a teen girl IRL compares to the way it’s portrayed in pop culture?

JJ: I think one of the main problems is most “teens” portrayed in T.V. and film culture are played by actresses who are well into their late 20’s, so you often get an oversexualized, inaccurate portrait of a comfortable, established adult rather than a real and raw teen girl. Like, where are the pop up pimples or bad braces? Being a teen girl is certainly not as glamorous, or dramatic, as pop culture would like us to believe. It’s exciting and magical, but not perfect. Never perfect.

EJ: Teen girls are also portrayed in pop culture to be sooooooo emotional and basically some mess that isn’t capable of being rational. I am very very emotional and sensitive but I am also capable and smart and it took me a long time to realize those things aren’t mutually exclusive.

I’m interested in majoring in cinema and media studies. Watching Teenage Girl World gave me the urge to create more projects and put myself out there more. What advice would you give to other young aspiring filmmakers/artists/musicians to stay motivated and complete satisfying projects?

JJ: There’s this really special quote by Andy Warhol, that reads, “Don’t think about making art, just get it done. Let everyone else decide if it’s good or bad, whether they love it or hate it. While they are deciding, make even more art.” It’s so easy to talk yourself out of creating, to get wrapped up in other people’s opinions of you and your worth. Forget ALL of their opinions. You have to create without a final product in mind, and just enjoy the process. The whole time we were making TGW we quite literally had no idea what we were doing, and made it all up as we went along. We recorded the title track on Garage Band, in our bathrooms, with just the mic on our computers; we filmed/edited the entire documentary with a single camera and iMovie. You don’t need the fancy stuff to make something important or special, you just need to figure out what you care about and see it through til the end.

What memories do you have that you think most perfectly encapsulate your teenage girldom?

The digital portrait of Jianna and Emily at the top of the page was created by Peyton Fulford. View more of her work here.