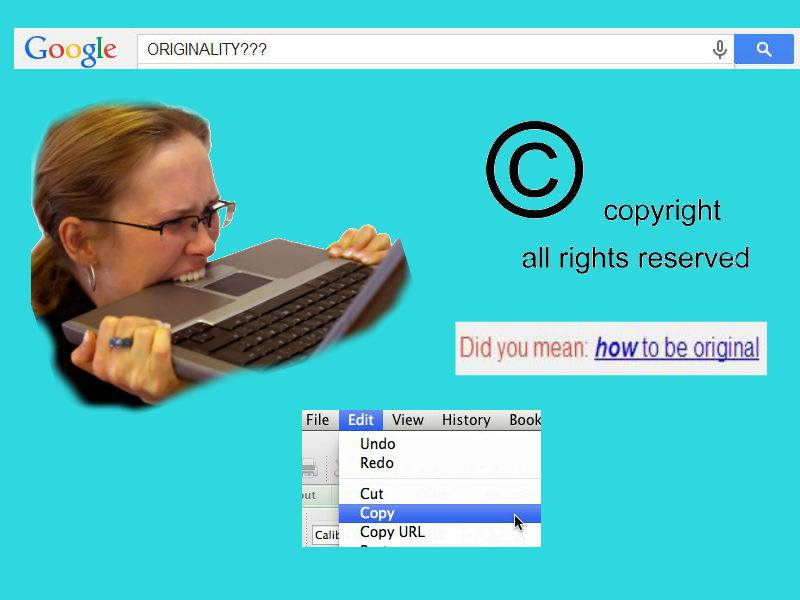 Is anything original now? Are we just re-cycling the same stuff over and over again but with a different word order or colour scheme? Has everything been done? Am I just copying bits of things I’ve seen from other places and shoving it all together and labelling it “FRESH IDEA”?

These are questions I ask myself on a regular basis. I have days when I just start FREAKING OUT that I am SO unoriginal and I’m just trying to live the life of my favourite film’s protagonist or favourite book character and not my own.

I just had one of these spells when I was writing in my journal. I got really frustrated and tossed the journal across the room because I felt that everything I was writing was just a repeat of what someone else had already said, or was at least heavily influenced by other people’s opinions and therefore what I was writing was not valid. That’s bullshit, and I was being stupid. To be able to live fulfilling and satisfying lives we must be able to accept that yes, we will be influenced by other things and carry some parts of other things into our own creations, but this does not mean that there is no such thing as originality anymore or that our ideas are any less valid because they have been influenced by something else we’ve seen. It would be stupid and unrealistic to expect somebody to have an idea that hasn’t been inspired by something, even in the slightest way. Sometimes we don’t even realise, because our brains have an amazing ability to store basically all the things we’ve processed, and sometimes some of these li’l things float into our thought processes when trying to come up with something. It’s like a recipe. The first person to ever bake a cake just threw together a load of random ingredients and it tasted good in the end, and the beautiful thing that is cake was born. Now, when somebody bakes a really good cake no-one is like “Well, you didn’t invent the cake, so it doesn’t count.” NO. That doesn’t happen!!! So, we shouldn’t mentally punish ourselves for adapting someone else’s creation and making it our own. Of course, there’s a line where inspiration slips into plain ol’ stealing, and that’s wrong and you shouldn’t do that, but if you’re just getting some inspiration and not claiming anything that isn’t yours as yours, then you’re good and no-one is getting hurt.

I’ve been influenced by so much and in a way, it’s kind of scary. If I watch a film or a TV show that I really love, I will consciously and subconsciously take parts of the dialogue or actions and put them into my own life and situations that I find myself in. For example, after marathoning Broad City this week (which BTW guys is HILARIOUS AND YOU SHOULD WATCH IT) I found myself trying to be more like Abbi and Ilana in terms of ass-kicking, no-bullshit attitudes and also by sporting the things they had been wearing, such as bodycon skirts that Ilana wears every so often. My attitudes and actions are so heavily influenced by the pop culture I’ve been ~*exposed*~ to, and I think that’s kind of cool as well as odd. If I hadn’t seen the films I’ve seen, or read the books I’ve read I would be quite different and probably quite boring. Think of it like this (sidenote: I’m on a roll with these metaphors today, right?)  we are like a jigsaw, with some missing pieces and quite a few blank pieces. The things we do in our lives; people we meet, films we watch etc. all add a splash of colour to the jigsaw, and fill in some missing pieces and we become more and more developed.

We have to accept the fact that we are going to be influenced, and we shouldn’t just accept it, we should embrace it! Congratulations, you are a wonderful concoction of your favourite things with a touch of your true self and that’s pretty damn awesome!! If you’re like me and freak out about the lack of originality in the world, take a deep breath and remember it’s all good. Now go buy the replica of one of Clueless’ Cher’s outfits and ROCK IT.